A Slight Change of Plan

I had sort of a plan at the start of the year for what I was going to try and get painted, but it looks like the plan is changing, as the Wyrley Retinue have now decided on our demo game for next year. Unfortunately for me, it doesn't involve Wood Elves, Skaven or LotR figures!

I'll give more details soon, but in the meantime, I'll leave you with a couple of clues... 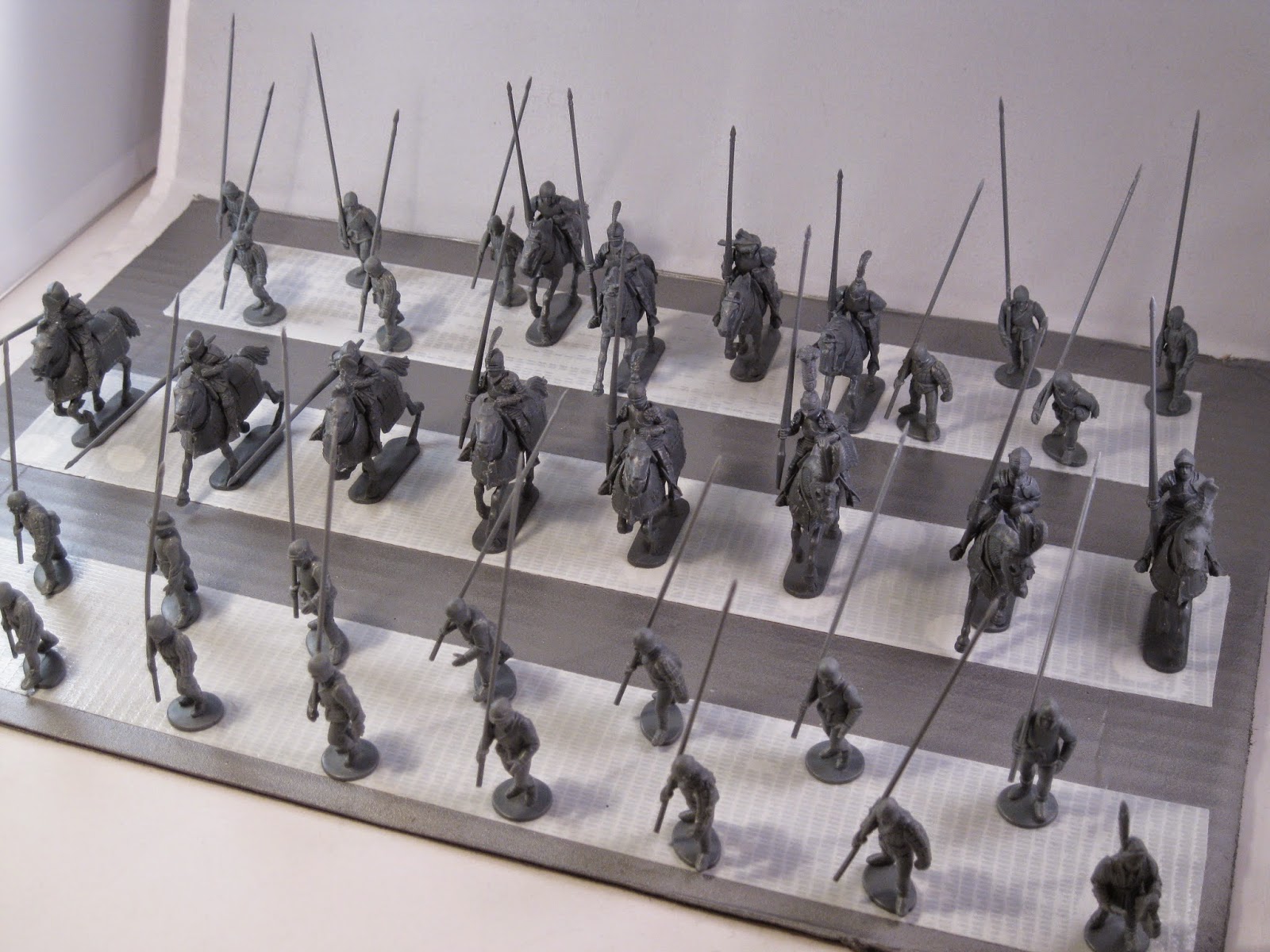 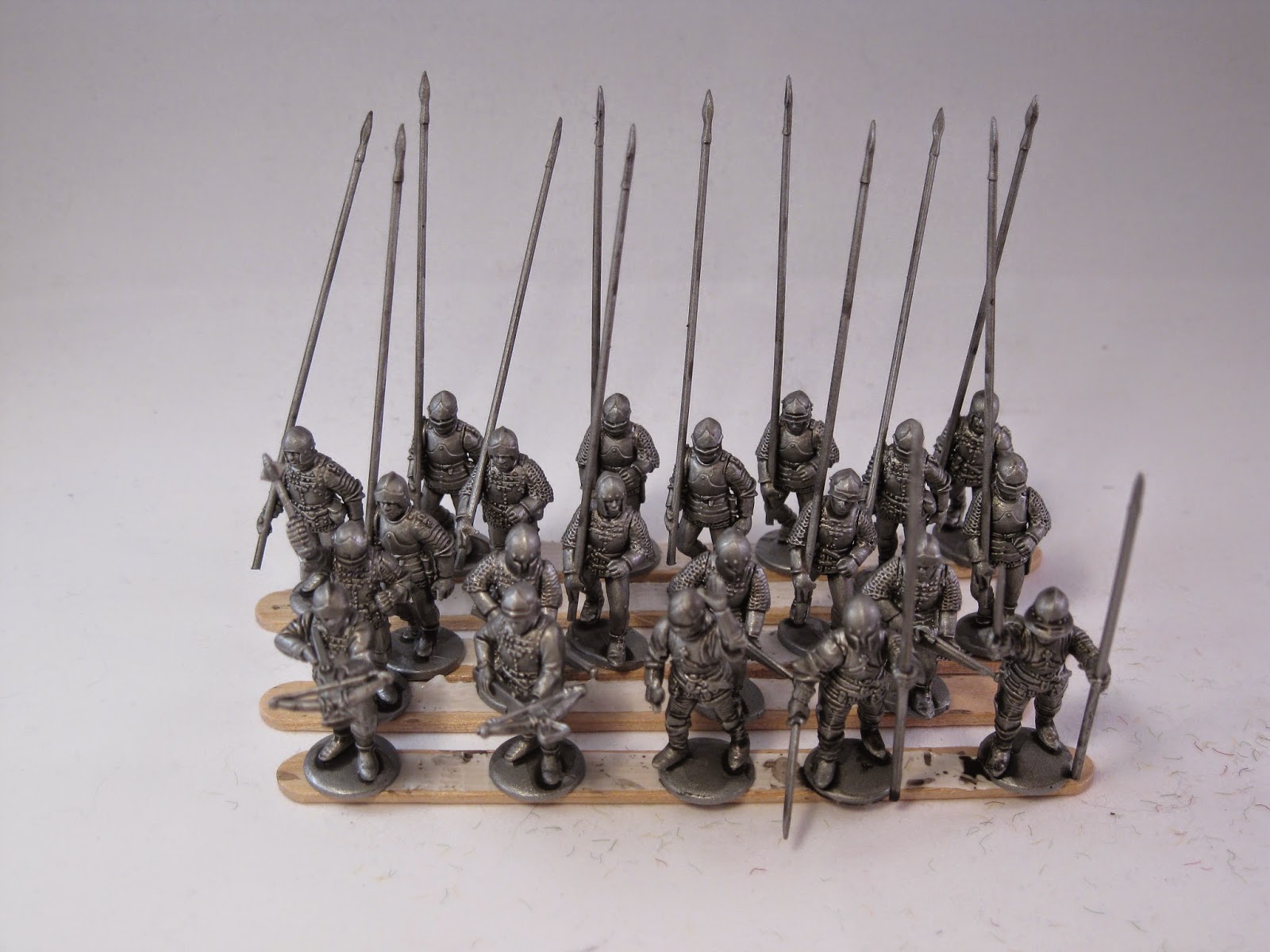 Posted by Beithir at 15:30 2 comments: Links to this post

The Northmen Are Coming!

Again rather belatedly, our first bunch of SAGA games were fought on Easter Sunday. We managed to get three games in in a relatively short session surprisingly, given our unfamiliarity with the rules. It really is a quick and easy game to pick up if we can manage it!

Paul was late arriving (an affront we're used to, but rarely forgive!) so myself and Gary took the first game. I'd forgotten I'd taken my camera with me, so there are no shots of the first game, which is unfortunately as it was my best result! In was largely decided between our respective Warlords and Hirdmen, while the Warriors flitted around the periphery. I got the jump on Gary's Hirdmen, who died to my Hirdmen, only for Gary to then pounce on my weakened Hirdmen with his Warlord and a Warrior unit and finish them off. Our Warlords then duelled it out, and ended up slaying each other simultaneously to end the game in a draw.

By the time we'd finished, Paul had finally showed up so Gary sat out to play umpire while myself and Paul battled it out. We decided to up the game size to six points. I'd also remembered the camera by this point, so here are some photos! 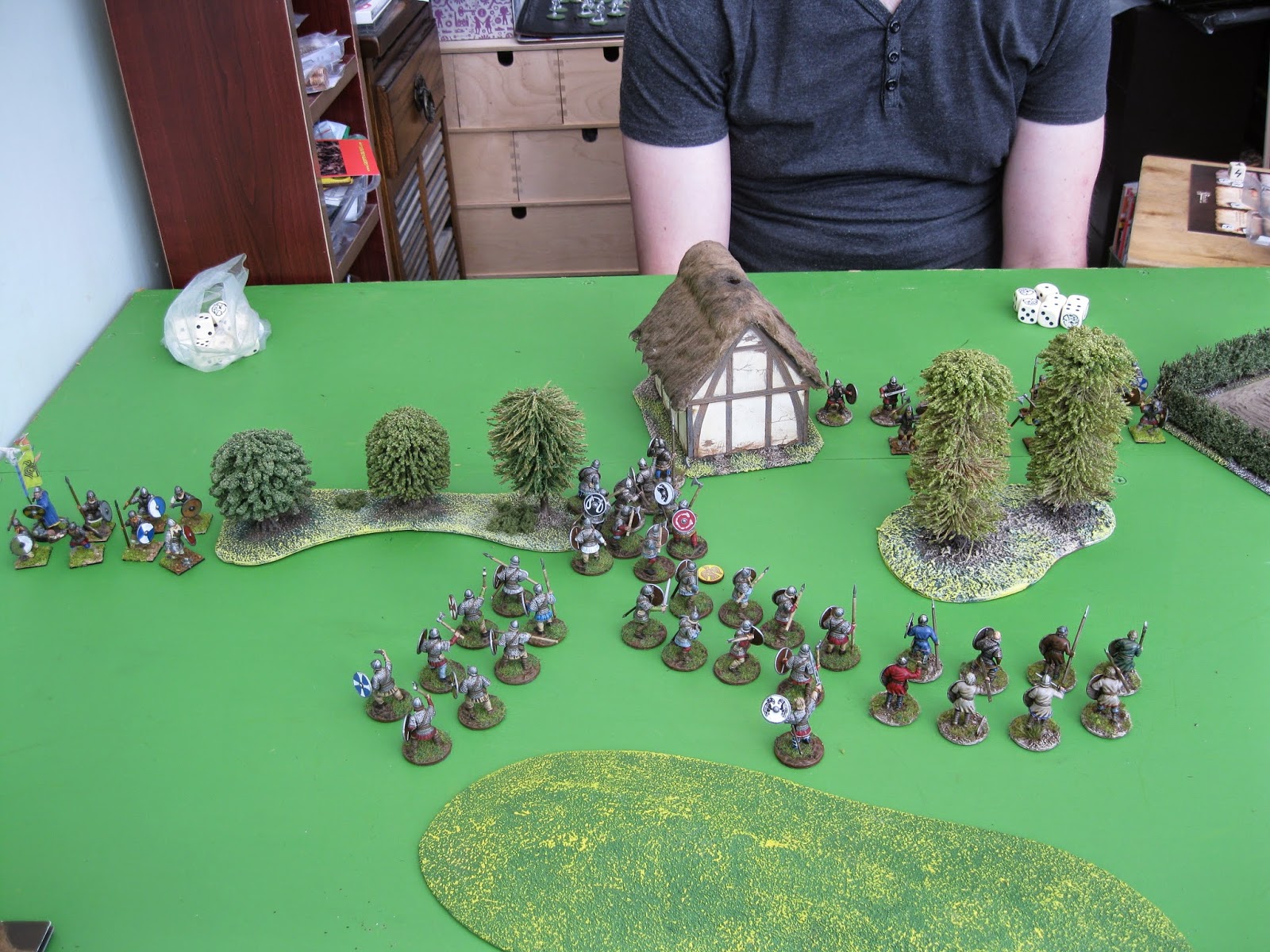 I initially took an aggressive approach by driving everything down the centre of the table towards Paul's battle line, as he'd spread his units thinly to cover almost the whole of the treeline. 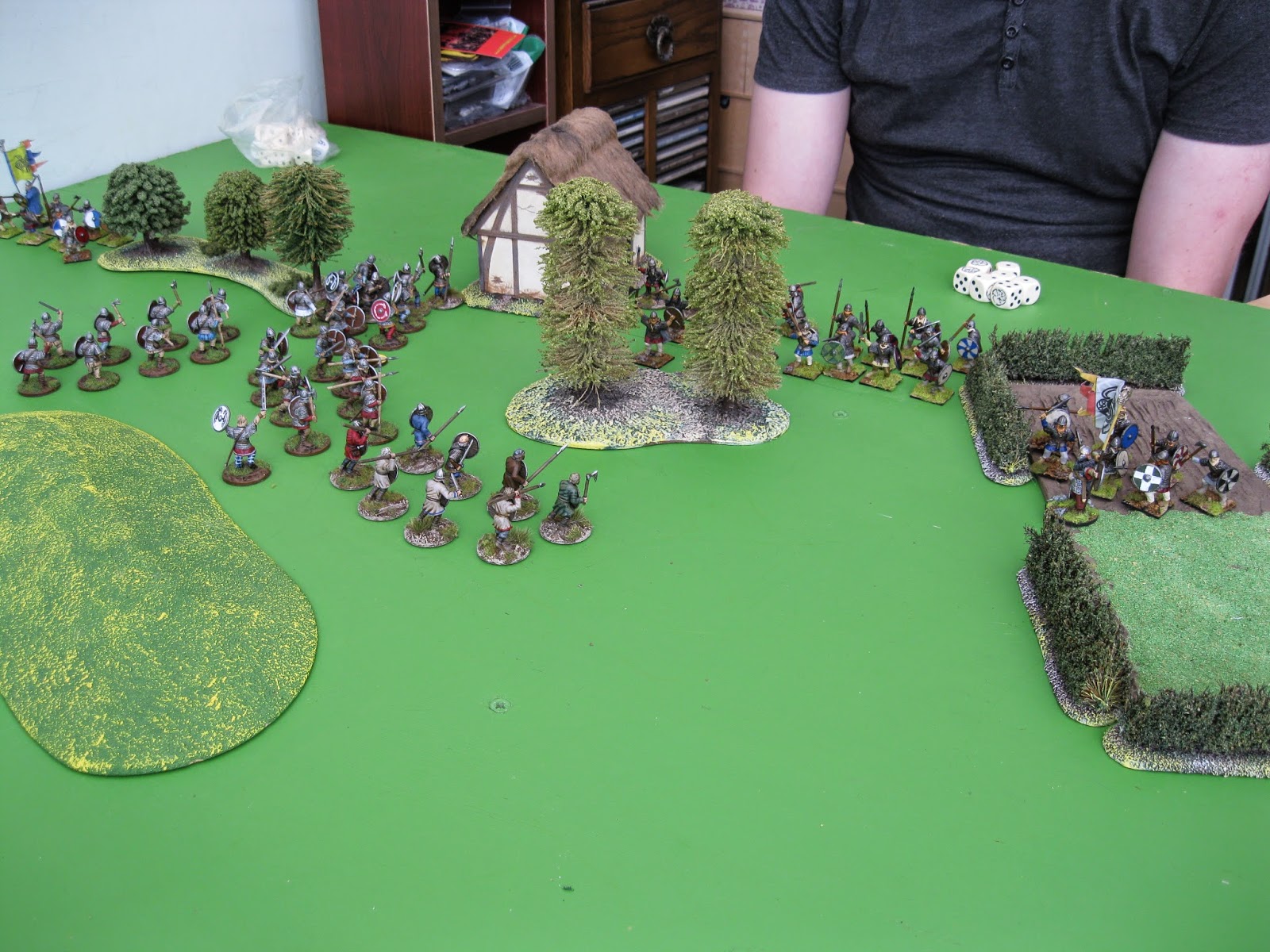 My Hirdmen (3 points worth!) led the charge, quickly wiping out Paul's Levy slingers and creating a big hole in the centre of his line.

Unfortunately, that's where I came unstuck. Having successfully divided Paul's force in two, I dawdled over what to do next - did I go left to gang up on his lone Warrior unit, did I go right to tackle the core of his warband? In the end, I did neither and it cost me... 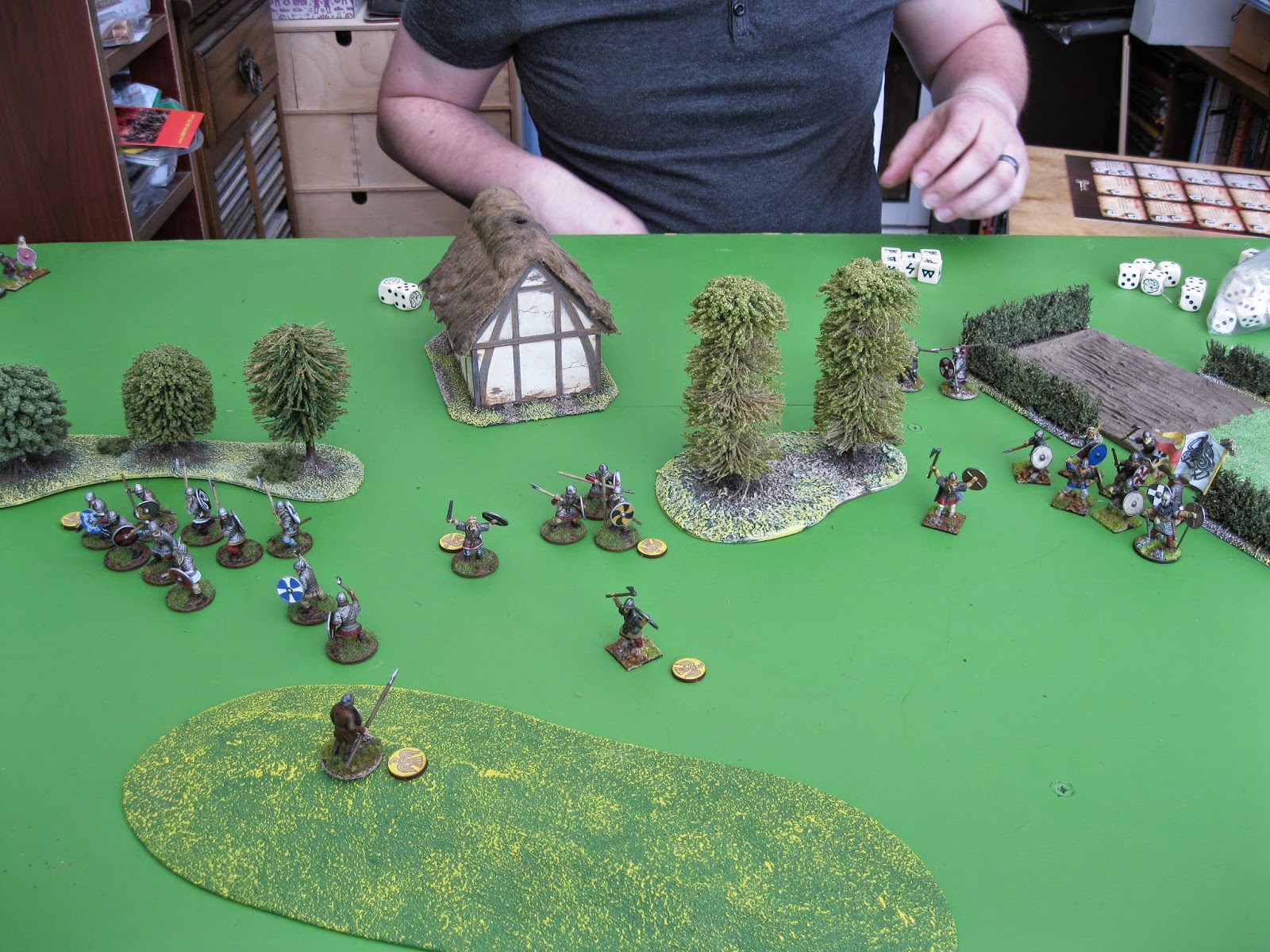 Paul advanced with his left-hand Warrior unit and forced his Hirdmen around behind the wood on the right, and effectively caught my warband in a pincer movement. My Hirdmen and a Warrior unit combined to eventually wipe out Paul's Warriors on the left but I lost most of my own Warriors in exchange. On the right, Paul's Hirdmen shattered one of my Warrior units but were badly damaged in return. 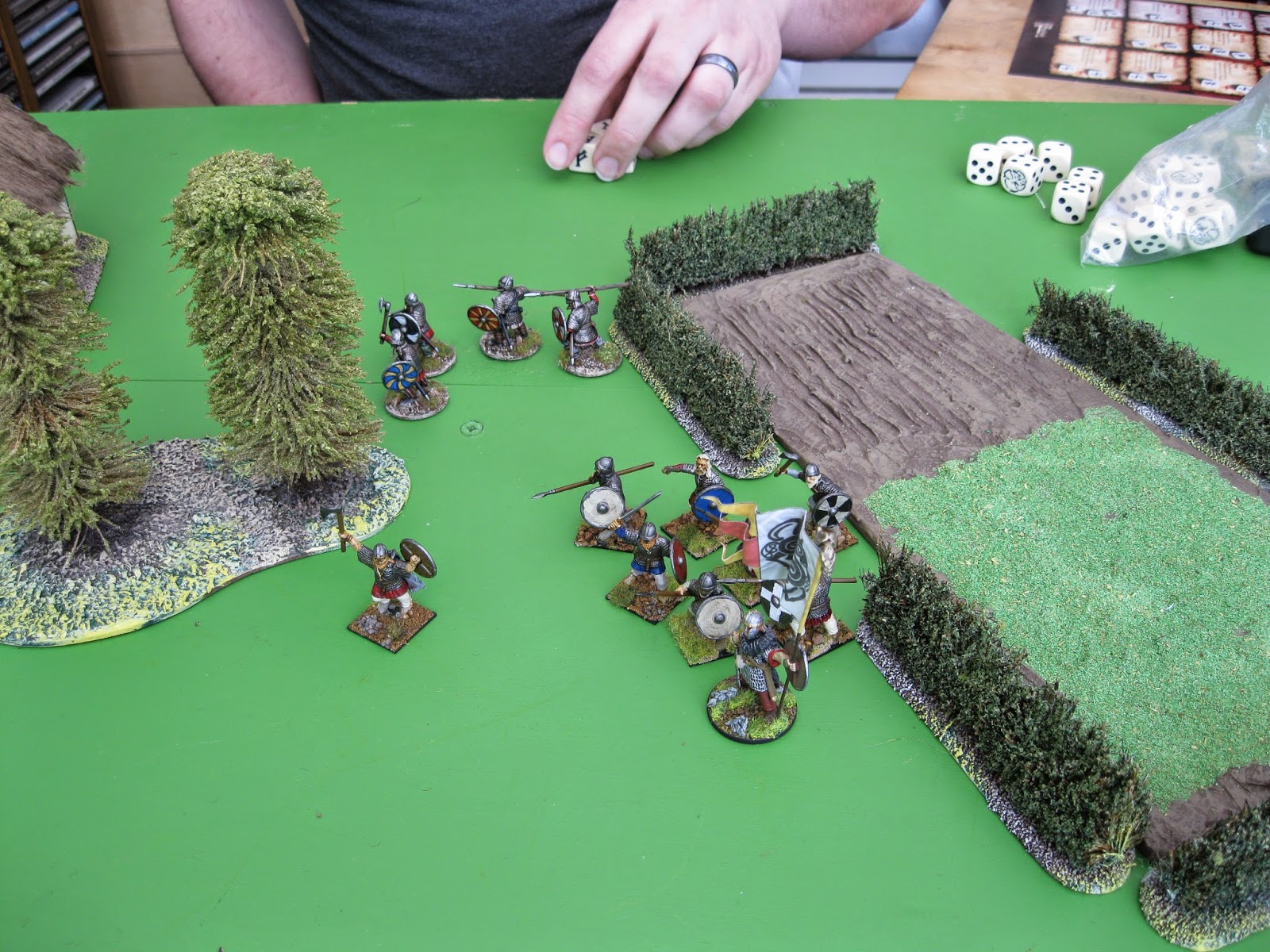 My Warlord and remaining Warriors attempted to cut down the last of Paul's Hirdmen, but failed dismally and took even more casualties. With my turn up, all Paul needed to do was charge his lone Hirdmen in against my fatigued Warlord and his dice didn't let him down - the Hirdman died, but so did my Warlord and I had lost the game!

Next, it was my turn to sit out and watch Gary and Paul play. With a sparsely covered field to fight over, this fight was a classic battleline encounter. 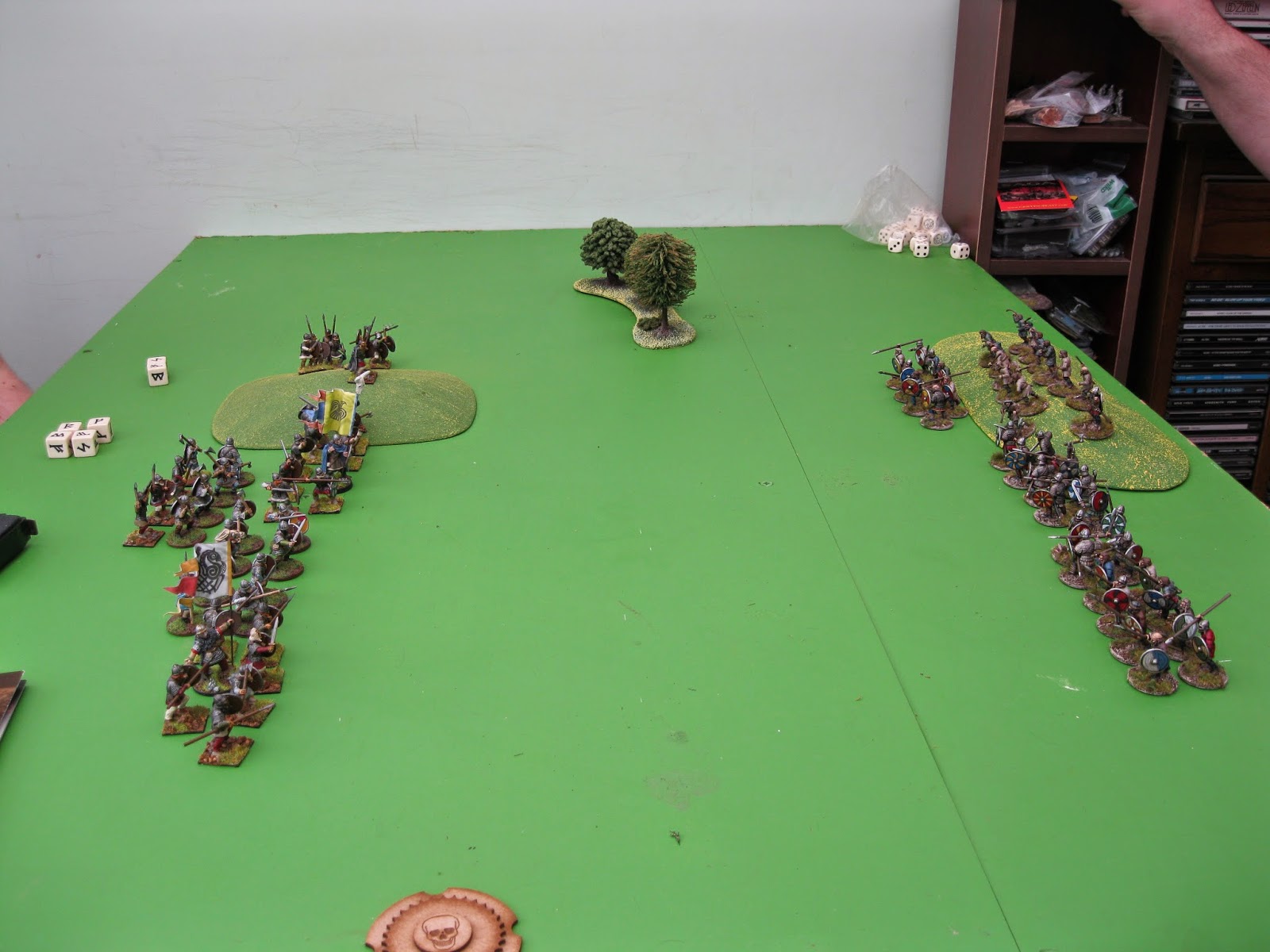 Gary presented a solid wall of shields in the face of Paul's advance, while his slingers rained missiles down on the enemy. 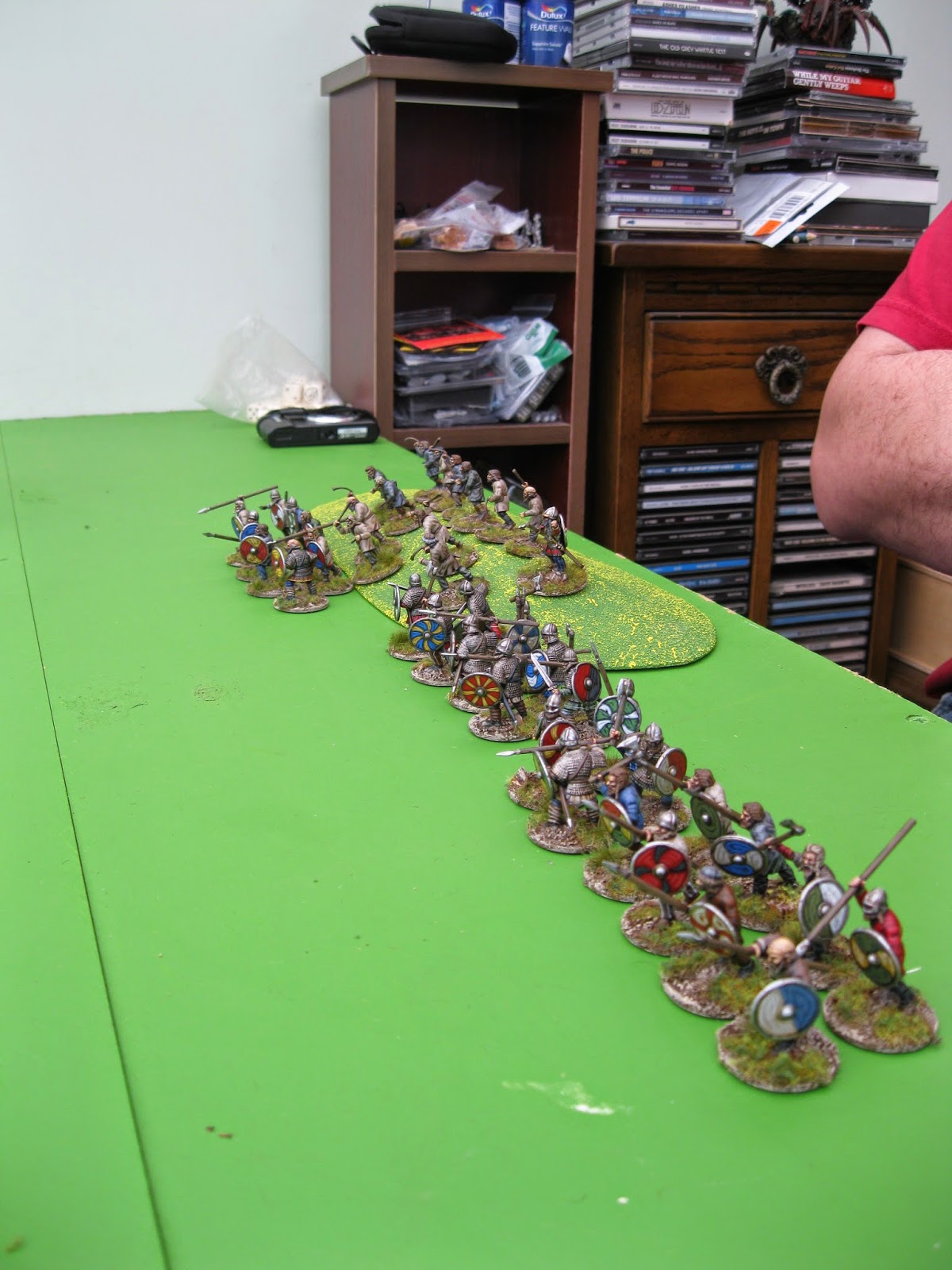 Paul quickly advanced his warriors across the board to force some response from Gary, who advanced his own Warriors to meet them. In the end it was Paul who came off worse, as the combination of swords and slings wiped out one of Paul's units in short order. 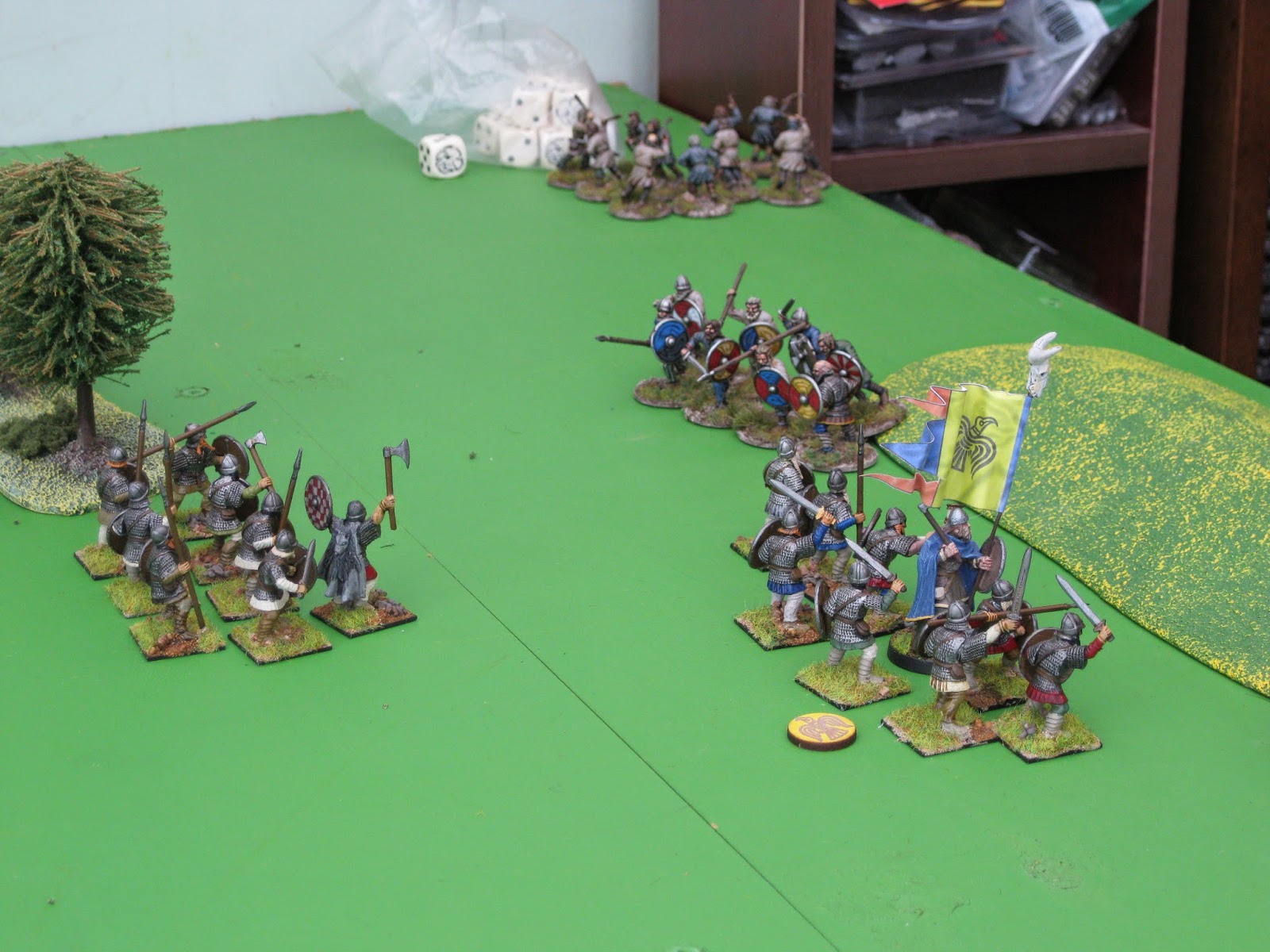 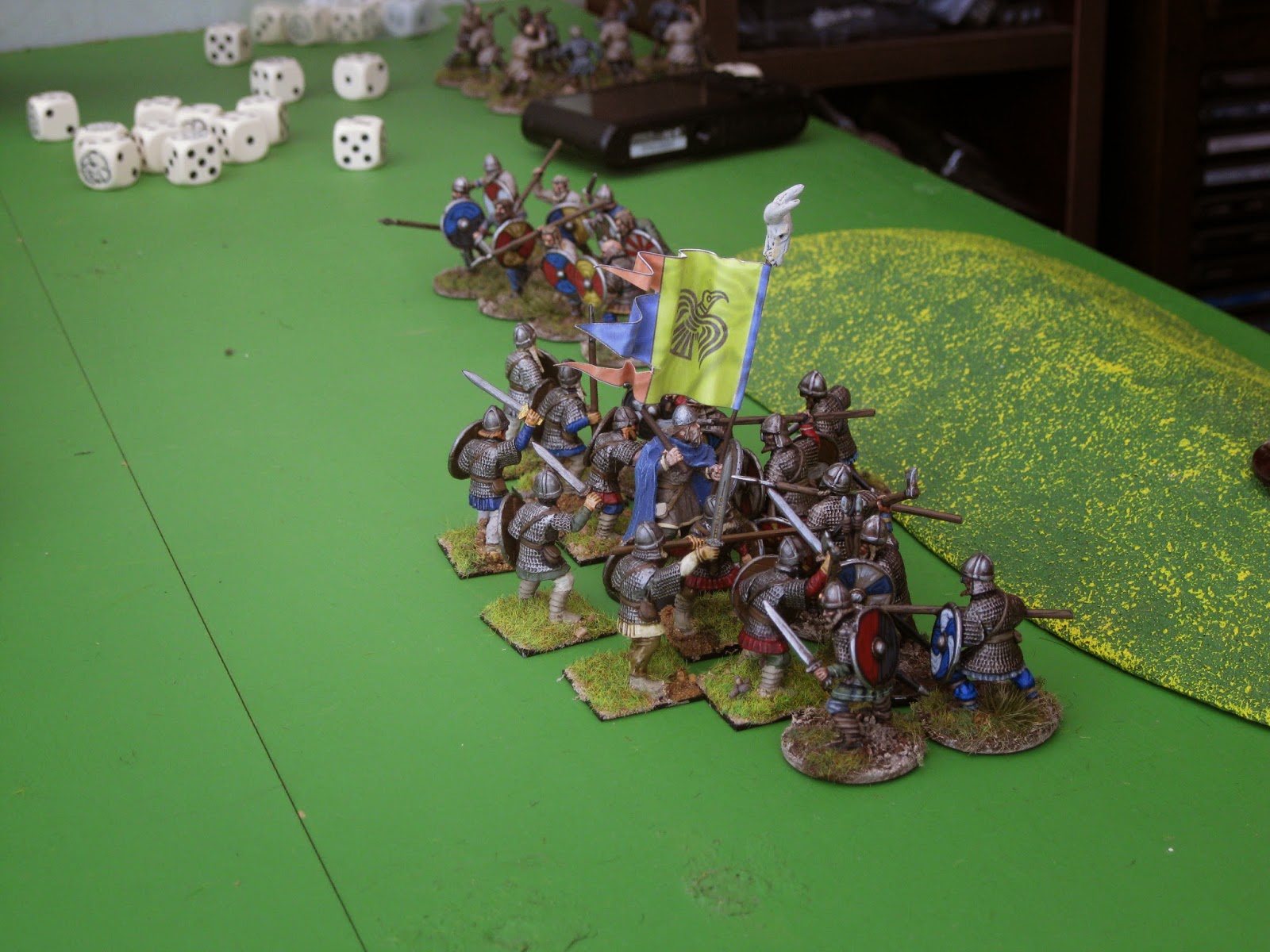 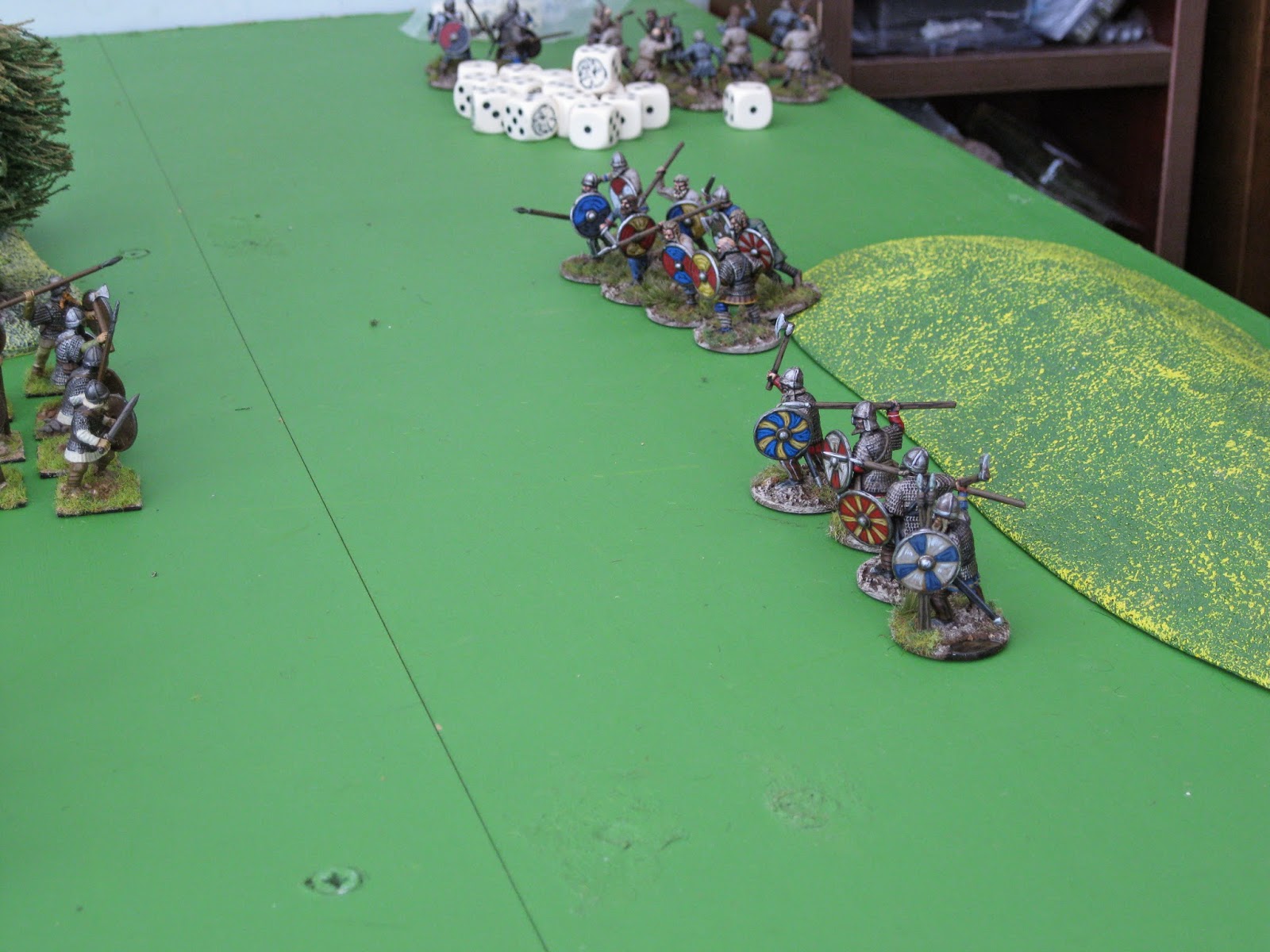 The real action (which, of course, I didn't take any photos of...) was happening on the opposite flank though, as Paul repeated his "trick" from our game, with his Hirdmen charging recklessly across the board to isolate Gary's Warlord (who was positioned far out on the end of Gary's battleline), racking up multiple fatigue counters in their efforts to break through and get to Gary's warlord before he could respond. In the end, it paid off - Paul's battered Hirdmen eventually got to the Warlord and killed him.

So despite turning up late and getting deserved abuse for it, Paul paid us back by winning both his games. I'm not sure his tactics will work quite so well in a campaign though - despite achieving the victory conditions in both games, his warband came off much worse than either mine or Gary's in terms of casualties. He might win the battles, but he won't have many figures left to claim the prize at this rate!

Posted by Beithir at 10:00 2 comments: Links to this post

Rather belatedly, here's the final group (for now) of Vikings for my SAGA Warband. These represent two points worth of Hearthguard - four with the usual sword/axe and shield, and four with Dane axes. Unfortunately, the Viking faction doesn't get any special rules for Dane axes (you have to play as Anglo-Danes for that...) but the figures are too cool not to include.

As previously stated, the intention with the Hirdmen was to distinguish them from the basic Warriors with their shield designs. These all feature rather more complex freehand designs than the Warriors, mostly utilising raven and serpent designs. I think my favourite though is the blue and white knotwork shield - it looks impressive (I think) but was actually one of the simpler shields to paint! 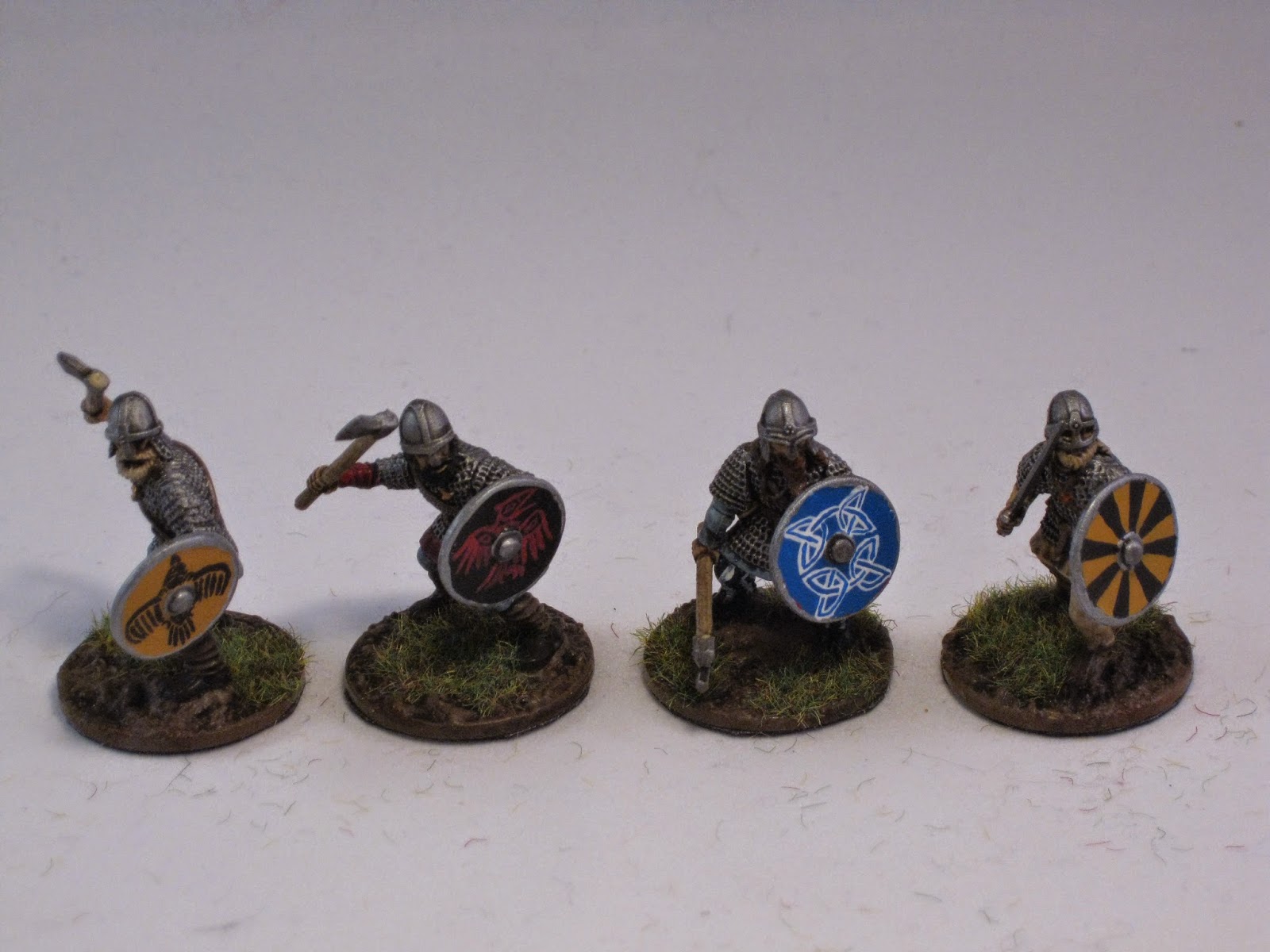 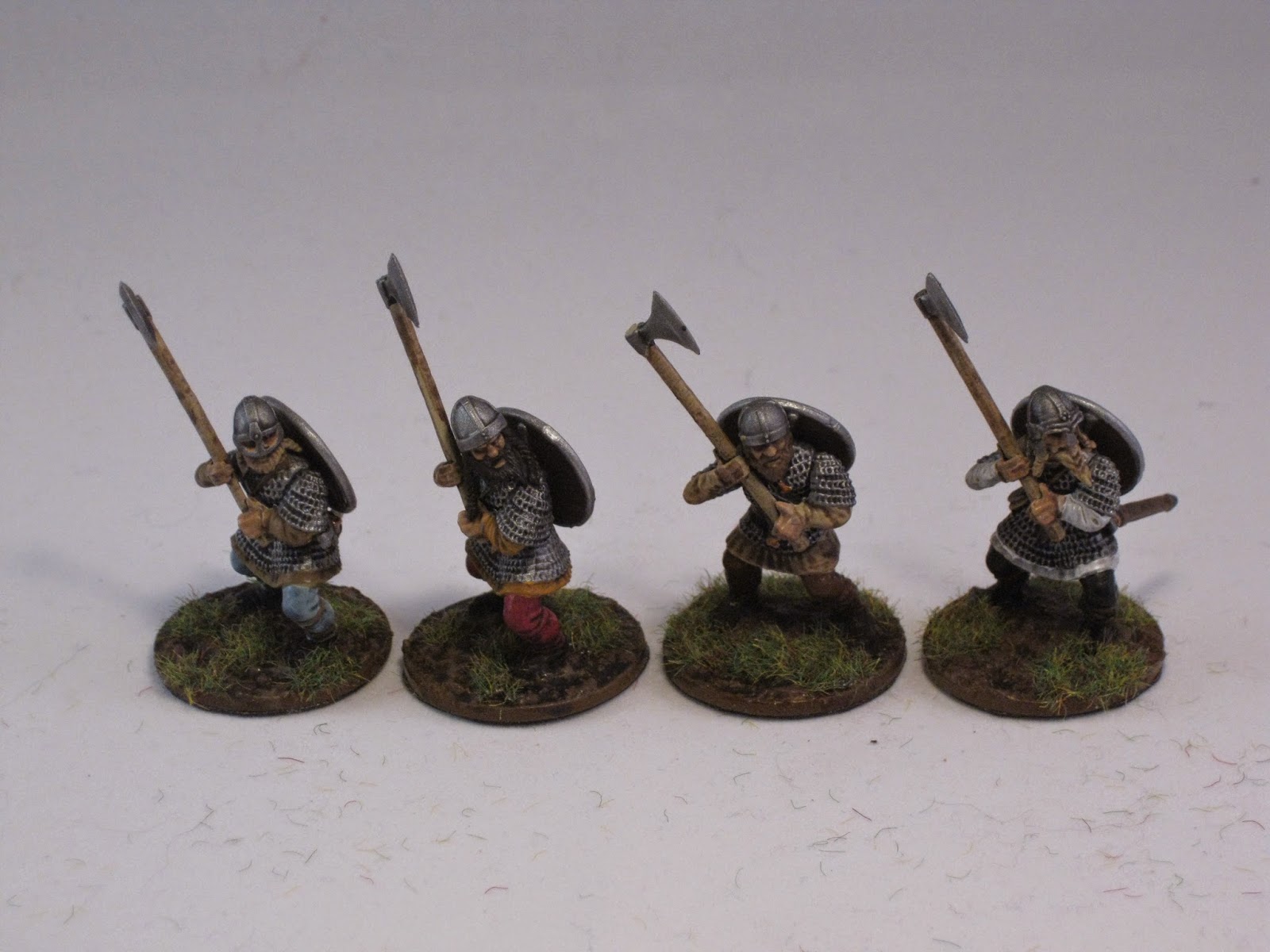 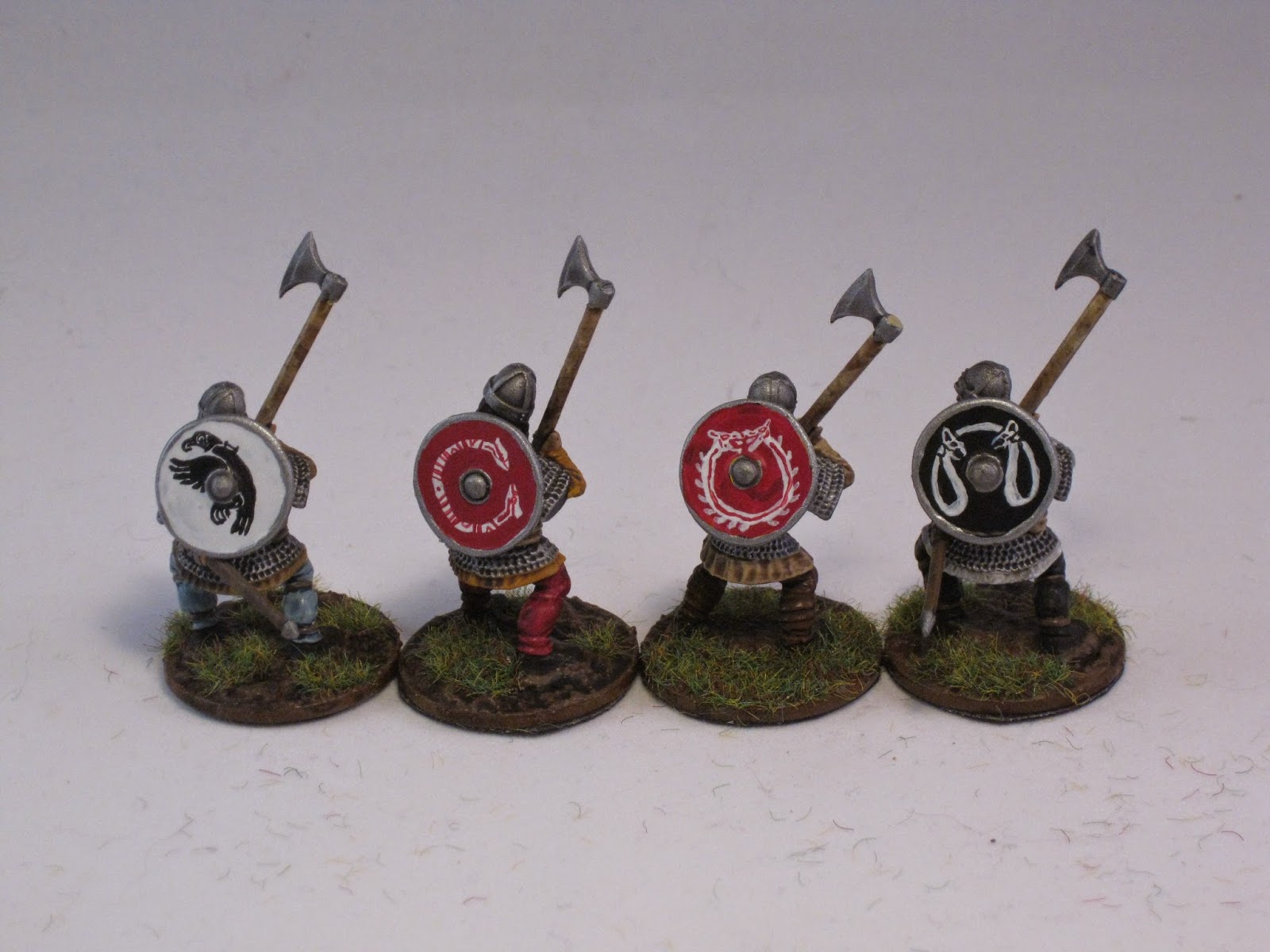 This fearsome fellow is deputising as my warlord until I paint a couple of proper character figures up. Given his performances in our first set of SAGA games, that will be sooner rather than later! 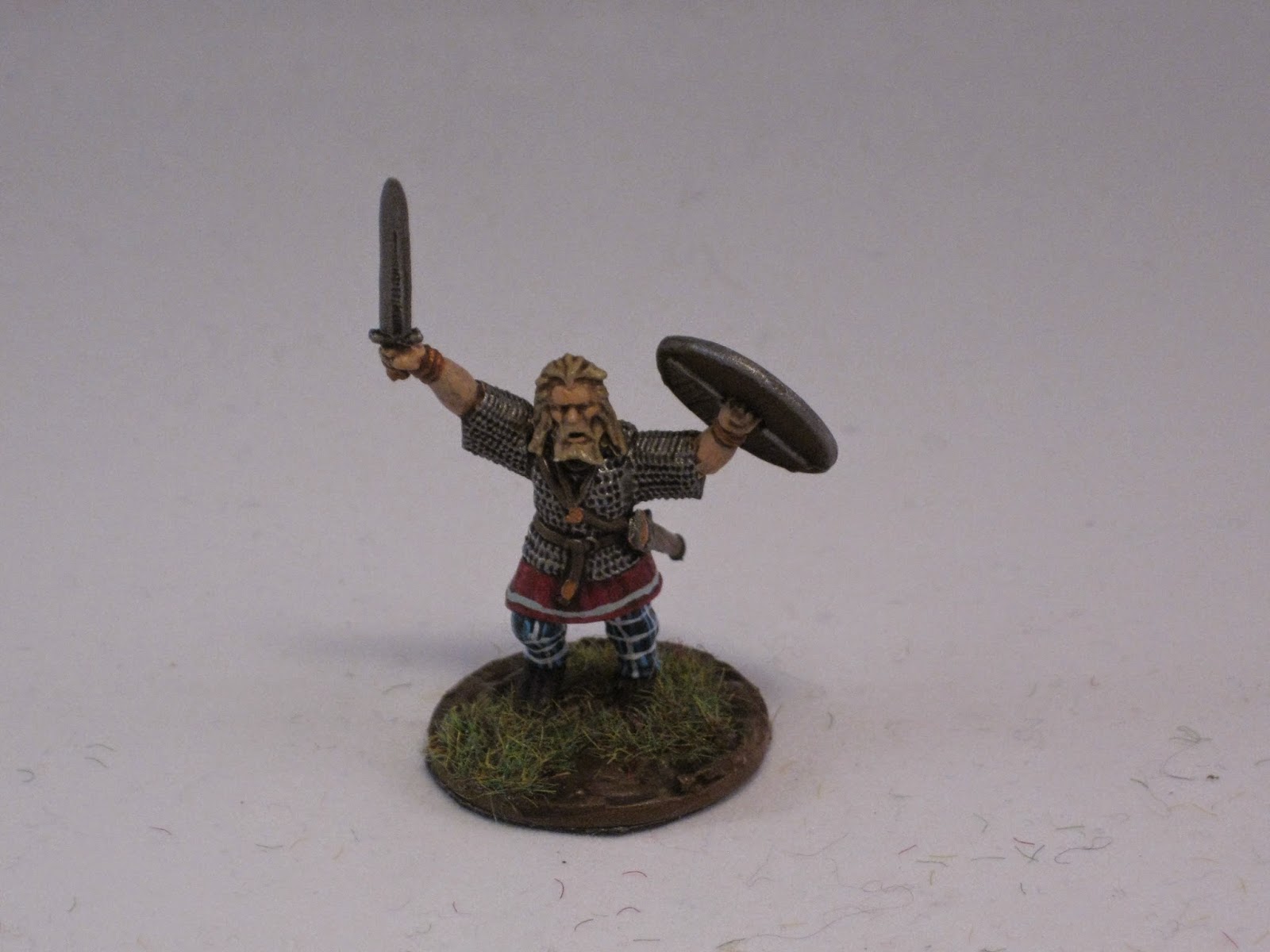 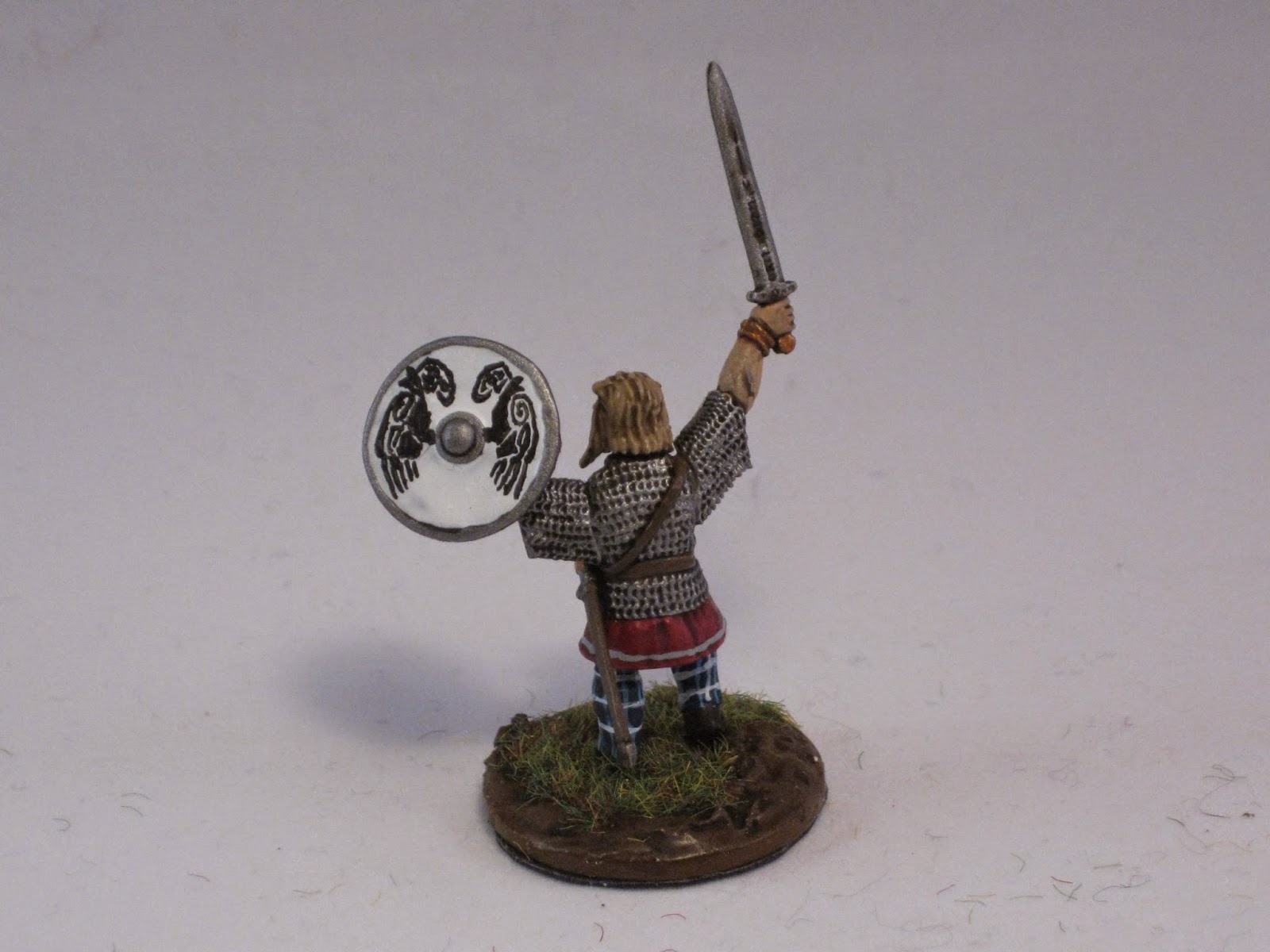 Posted by Beithir at 10:00 4 comments: Links to this post

Here we are then, a little later than planned, the third unit of Warriors for my growing SAGA warband. The shields took a little longer with these because I started out painted some more elaborate designs, only to realise that they looked a bit too elaborate to waste on mere Warriors! Instead I've saved them for my Hirdmen, so you'll see them soon enough. 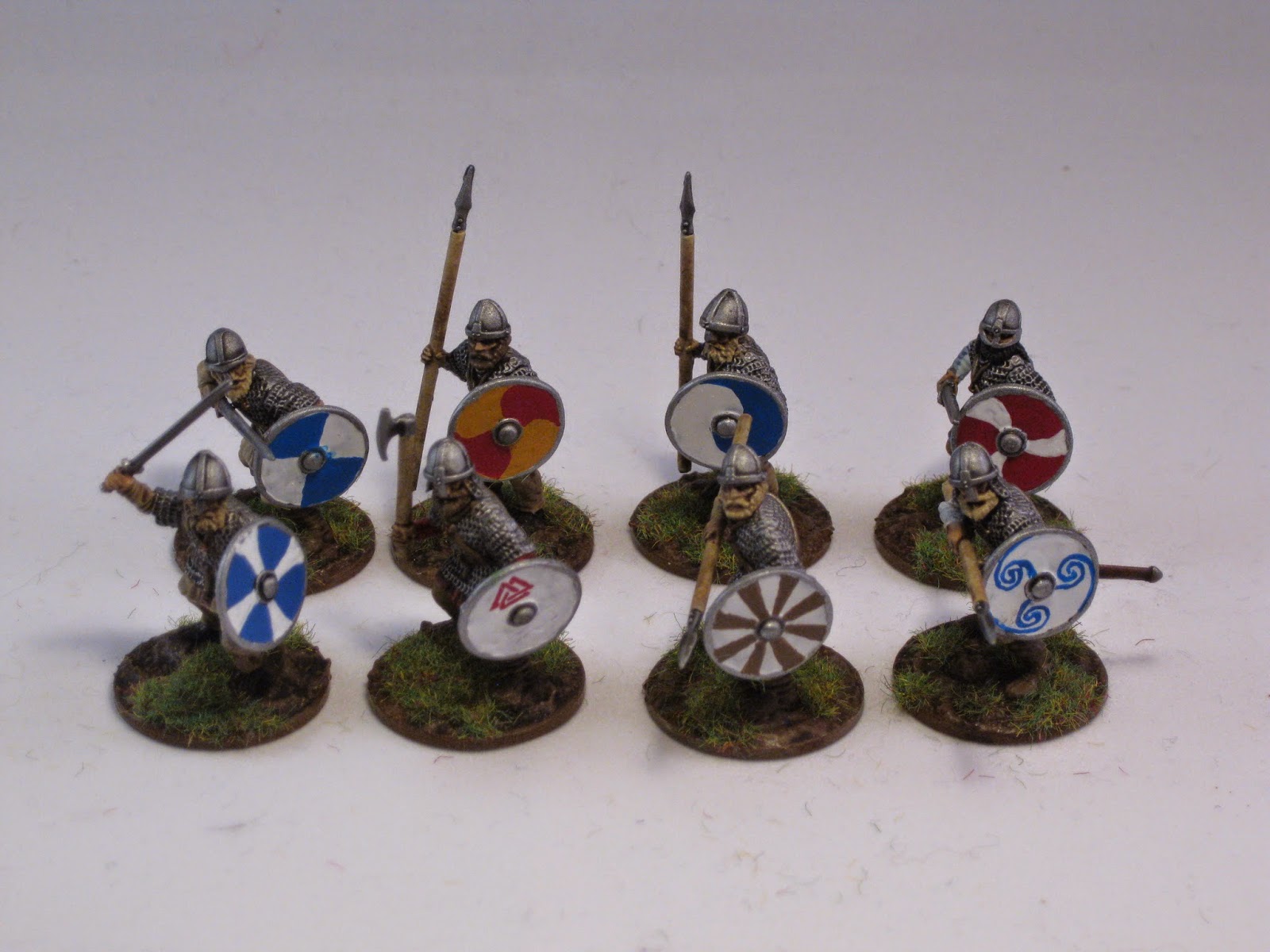 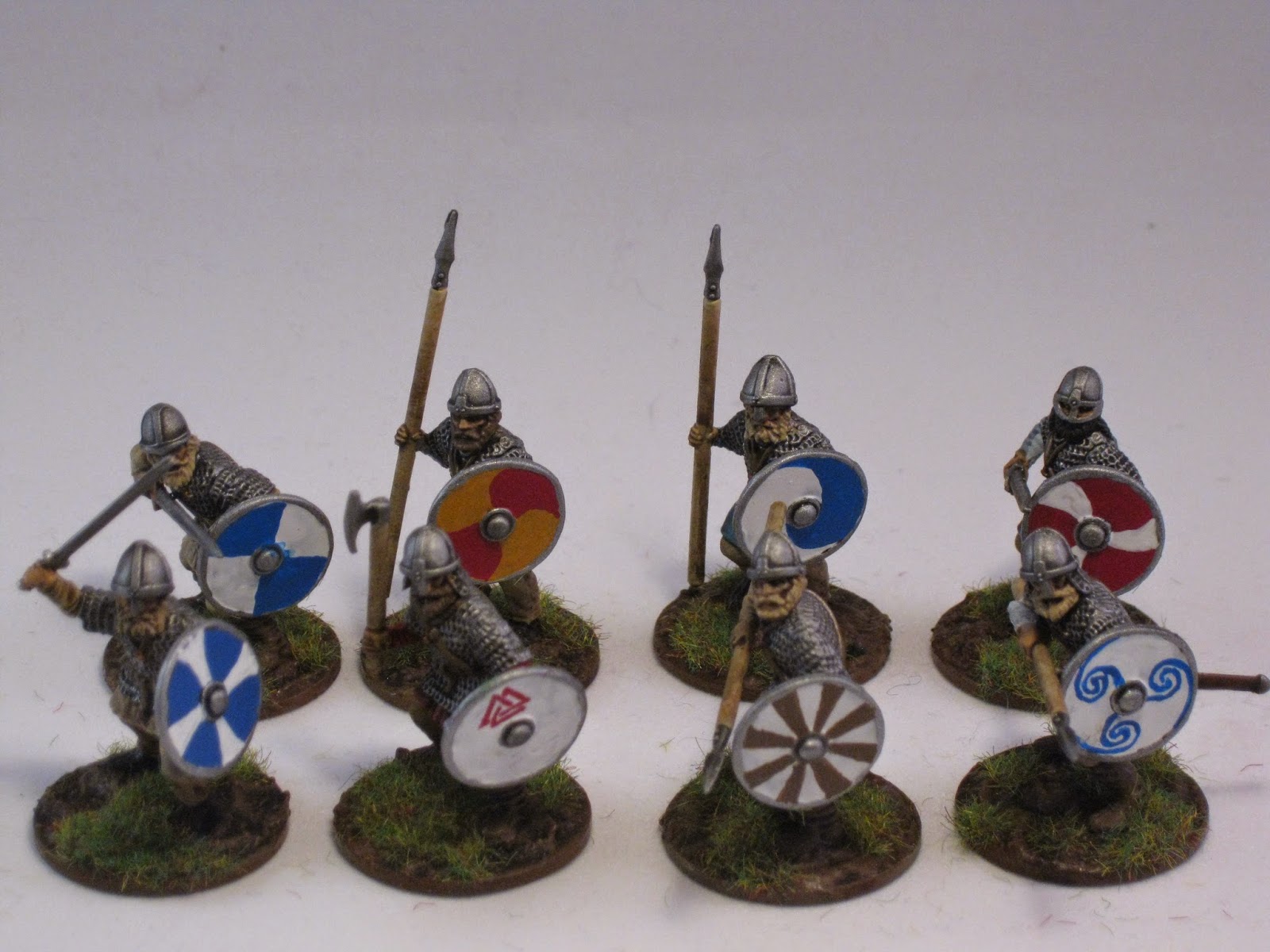 I'm also happy to announce that our first SAGA game has been arranged and a date has been set! Despite the fact that today is 1st April, this is no April Fools! Easter Sunday will see our warbands take to the field of battle for the first time, and if we're lucky (and remember the rules) we might squeeze a couple of games in...

Here are the second set of SAGA Viking Warriors. These were painted at the same time as the first unit, but had to wait until last week after WMMS to receive their shields. Again, they're all freehand and so they're all very simple geometric designs. I'm saving the attempts at more sophisticated designs for the Hearthguard, which are currently sitting on the painting table... 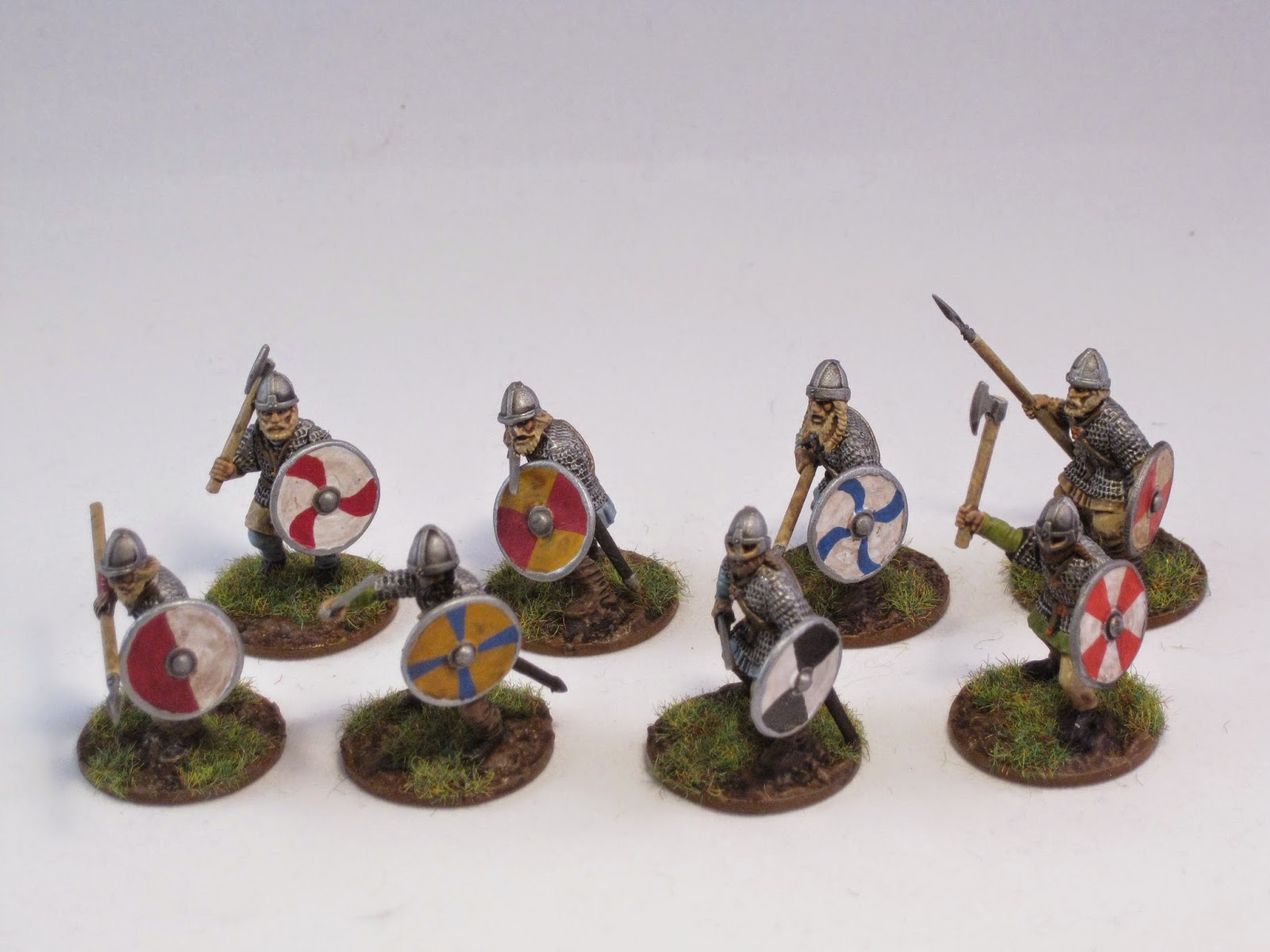 There are a few more warriors to show, who are still waiting for their shields. Once they're done, it's the turn of the Hirdmen and Warlord. Stay tuned!

Posted by Beithir at 10:00 No comments: Links to this post

Fury of the Northmen!

Here they are then - the first of my painted Vikings! In truth, these have actually been painted for about a fortnight now, but I've only just gotten round to taking pictures of them. Still, better late than never! 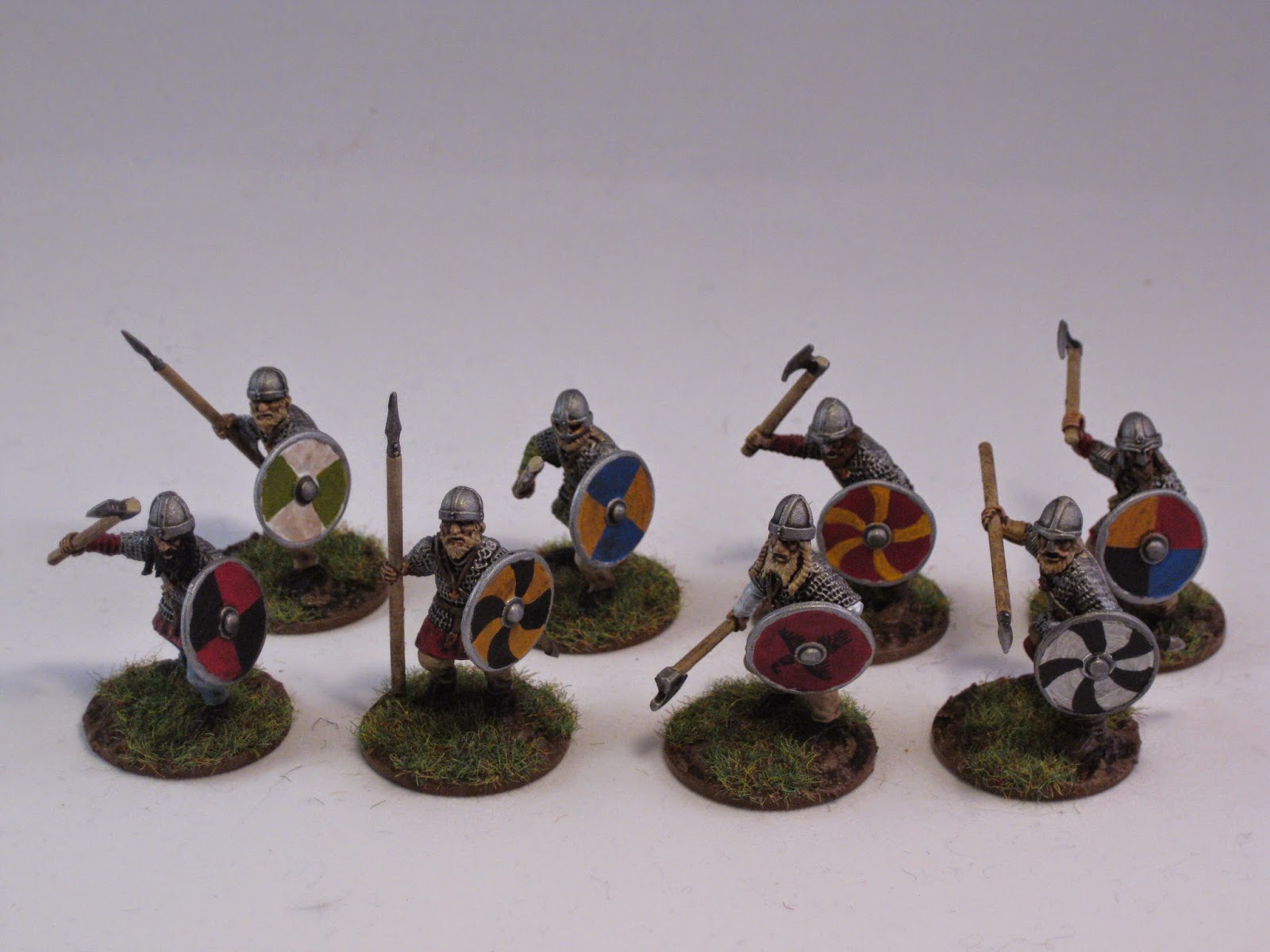 I'm pretty happy with how they've turned out, although they may be a little *too* grubby after the Agrax Earthshade wash so I may need to go back and add highlights. I've kept the shield designs pretty simple, both to reflect the fact that these are "basic" warriors and also to dumb them down to my painting level! I'm particularly proud of the guy with the raven shield though... 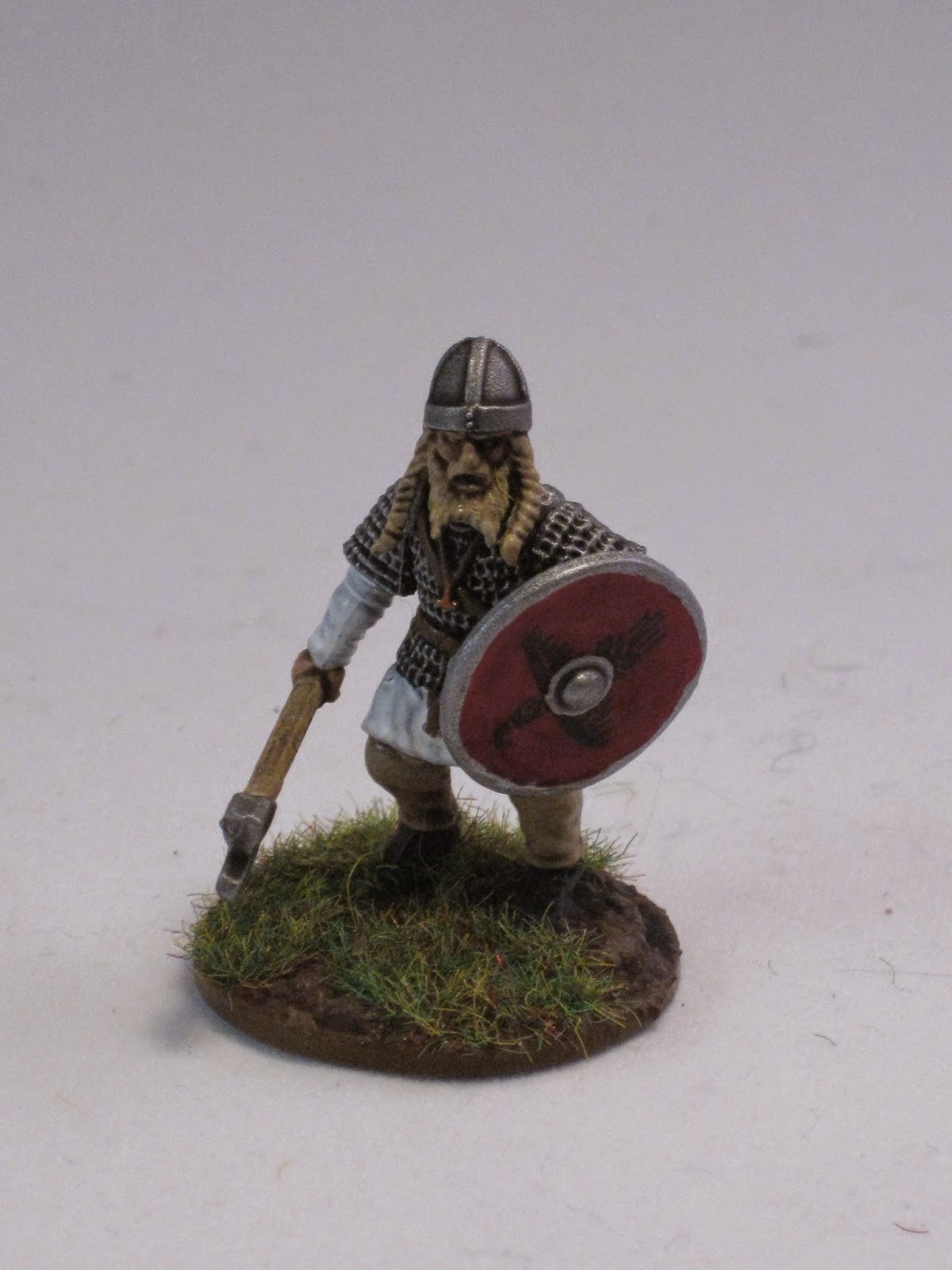 Posted by Beithir at 17:00 No comments: Links to this post

It's another slow month so far and the blogging has fallen behind a bit lately, but I am slowly making progress on a few fronts! The start of our Saga campaign is (hopefully) looming so it's all about Vikings at the moment. As mentioned in the previous post, I spent some money at the recent WMMS show. Possibly for the first time ever, I was extremely focused with my acquisitions as they were all made for a single project - Vikings!


All in all, these should all make some pretty good additions to the Viking games (if we ever get started!)